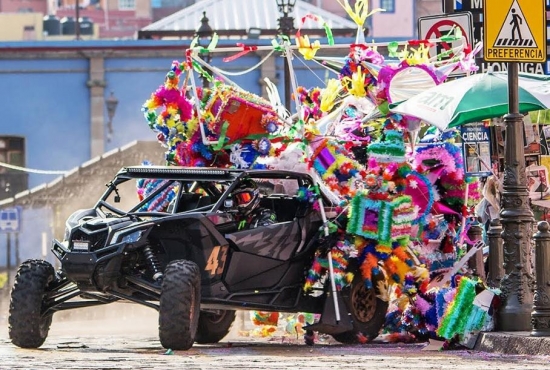 Ken Block staged a show on the streets of Guanajuato again

If you still do not know who Ken Block is, then you should definitely watch his drift show and the car park that he owns. The most recent video caused an incredible sensation among the audience. Ken on his beloved buggy rode out on the street of the small Mexican city of Guanajuato and began to literally drift.
Of course, if there hadn’t been a car like the turbocharged Can-Am Maverick X3 XRS buggy, he would not have been able to show such a spectacular show. Transport has 218 horsepower and this is a real beast. If you are a fan of Ken Block, then the locations presented have already been seen in Gimkhan. Ken really loves this city and very often arranges his shows.

Do not forget that "Gimhana" today includes more than ten episodes, each of which is unique in its own way. In the video, Ken shows his drifter skills.
Today Drifter Ken Block is one of the most famous in this field. It's not just that, because he is shooting his fiery and breathtaking auto videos all over the world. Fans love his crush and love of drifting. Today on Ken’s channel you can find dozens of different thematic videos related to drifting, he loves this business and performs it better than anyone else in the world.http://fiatforum.lv/http://fiatforum.lv/