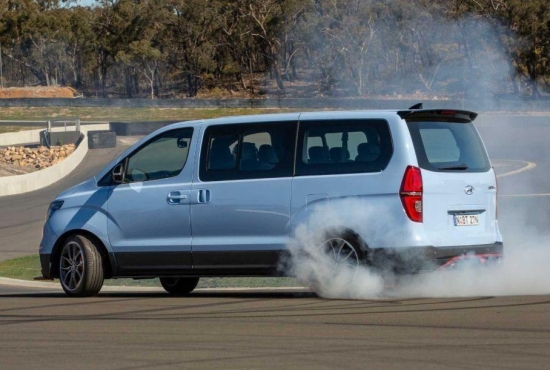 Hyundai has assembled a minibus for drift

Hyundai has once again proved that the company really knows how to create original projects, and is interested in developing a wide variety of areas. The idea of such an original minibus was realized by engineers of the Australian branch of the Korean company. Particular attention was paid to the chassis and the distribution of mass in order to exclude a coup during a drift, and they succeeded.
The Australians decided to radically change the project and installed rear-wheel drive, in order to make it more convenient to drift. As an engine, we chose tinturbo 2.5 liters. You can control using an eight-speed automatic transmission. In fact, this is the only instance that will most likely be used as an exhibition version.
But the developers have already managed to ride and show how you can drift on a minibus.

After the tests, it became clear that despite its size, the car accelerates to one hundred kilometers in just 5 seconds. The total mass exceeds 2200 kilograms. Well, of course, we paid special attention to the fact that you can drift on a minibus and not worry that it will roll over. This is a one-of-a-kind car with these characteristics.http://fiatforum.lv/http://fiatforum.lv/